With the onslaught of lock vendors introducing their new touchscreen deadbolts we recently installed Kwikset’s newest 915 series. I thought I’d pass along our thoughts.

If you’re not sure why you’d want one, check out our post You Want a Home Electronic Deadbolt

Like Schlage’s newest entry in the market, we found the Kwikset version to be stunningly beautiful but flawed. 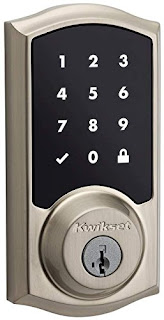 On the plus side:

But now the flaws:

Since installation, we have enjoyed using the lock, but am now awaiting a door painter so it looks beautiful.
Thus far the Arrow Electronic Deadbolt remains our favorite.